We love the beautiful historic architecture in Downtown Knoxville. It’s one of the many qualities that give downtown her charm. But maintaining that lovely historic quality requires work, and we’ve got two big projects underway.

When visiting this part of downtown you’ll find a few barriers. But you’ll also find restaurants, tap rooms, whiskey distilleries, retail, salons, event venues, and all types of businesses open and ready for customers! Here’s a quick list of questions – and answers – to help navigate this journey.

Are the streets open?

Yes, streets are open throughout the projects. Only the areas adjacent to the ramps and viaduct will be closed.

Where do I park?

Parking lots are all open.

If you’re heading to parking areas on Jackson west of Gay St, you’ll need to access Jackson from Broadway. Remember, you can access Broadway via Henley or Summit Hill. You can continue to access the parking lots under James White Parkway or any parking area on Jackson east of Gay St from Central St or State St.

Are the sidewalks open?

Yes. Sidewalks on Gay St, Jackson Ave, and throughout the Old City are open. Only the areas adjacent to ramps and viaduct will be closed. An east-west pedestrian walkway will remain open under Gay St throughout construction so you can get to all the businesses on Jackson Ave.

If I’m driving, how do I get to Jackson Ave?

If you're driving from north of downtown, the easiest route is going to be Gay St to Summit Hill.

If you're driving from south, east, or west of downtown, there really isn't much of a change. Just remember once you get to downtown the easiest way to Jackson Ave is going to be from Summit Hill. And once you park, there's an east-west pedestrian walkway that will be open under Gay St throughout construction so you can get to all the businesses on Jackson Ave.

If I’m walking from Gay Street or Market Square, how do I get to Jackson Ave?

When you get to the intersection of Gay St and Jackson Ave, look for the staircase with the colorful mural and super-cool lighting at the intersection just north of Gay St. An east-west pedestrian walkway will remain open under Gay St throughout construction. When you get to the bottom of the steps, turn left or right and you’ll find businesses open in both directions. And there will be directional signage to guide your way.

You can take the staircase at Jackson and Gay to get to all the businesses on Jackson Ave. You can also access businesses west of Jackson via Broadway. There’s no impact to State St or Central St so you can get to the Old City by walking down Summit Hill and turning down State or Central. Sidewalks, roads, and parking are open. If you're interested in a path that doesn't include the stairs, we recommend Gay St to Summit Hill to State St.

And the free trolleys will still be running. The Green Line will take you between Market Square, Gay St, and the Old City. A Green Line trolley comes around about every 10 minutes. Monday through Thursday, 7am to 8pm; Friday, 7am to 10pm; and Saturday, 9am to 10pm. Sundays are for walking.

Why is this happening?

Is there a map that shows parking and how to get around?

Yep, we've got one of those below. You can also download it here.

You can find details on these projects at knoxvilletn.gov/jacksonavenue and tn.gov/projects.

Please show the businesses in this area some extra support during these projects! 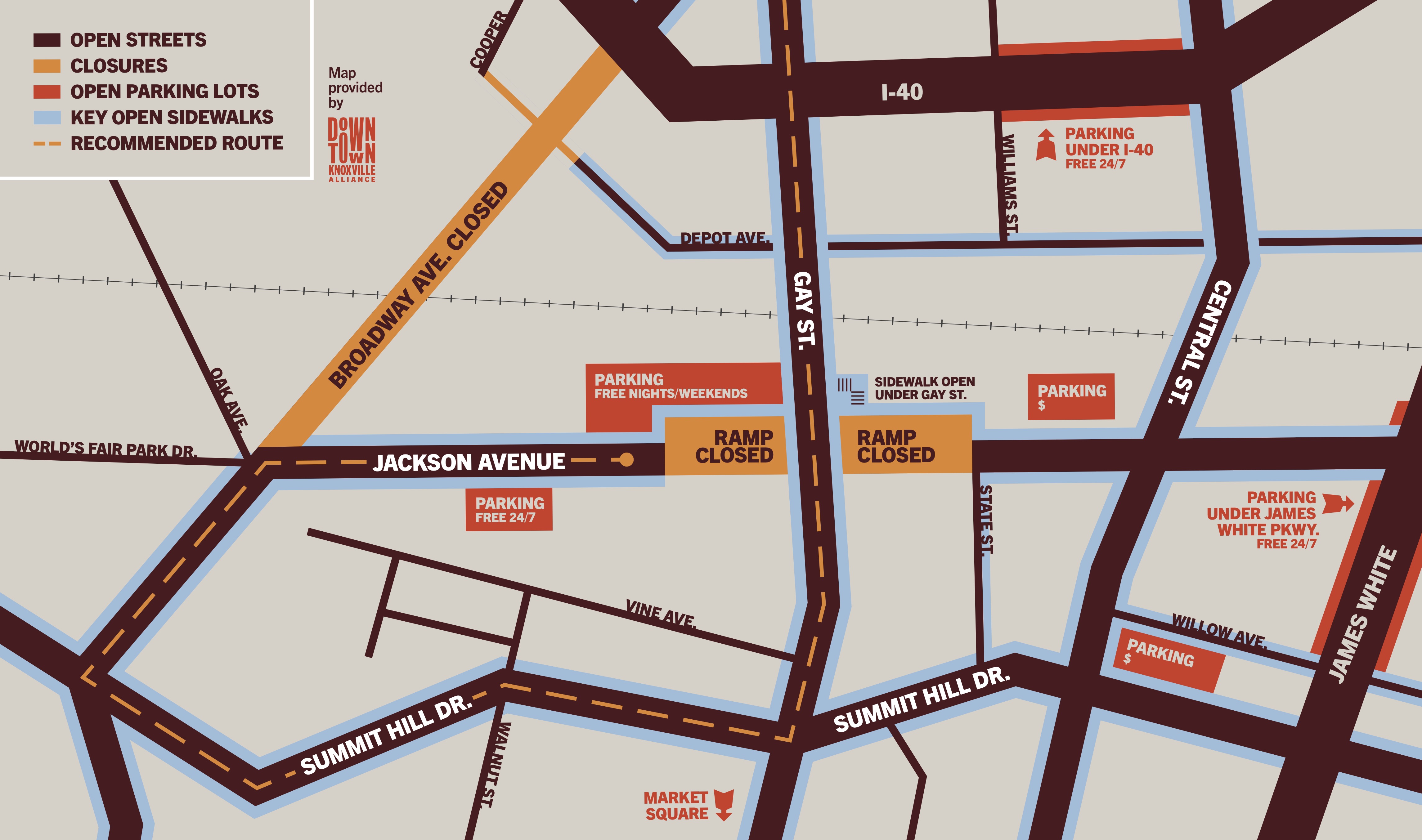